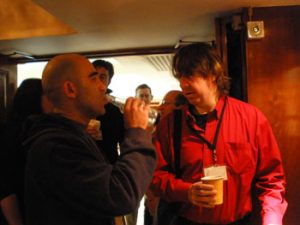 These sci-fi conventions are a strange experience. Imagine, if you will, the life of an author (this author, certainly): locked away in a remote, country retreat working away quietly, patiently – who is suddenly transported to a hotel consisting of a labyrinth of rooms occupied by at least 1400 extremely diverse people, many luminaries (not only authors and artists and critics, but professors of various kinds, editors of prestigious magazines and newspapers etc etc), and endlessly flowing beer (and some rather lethal cider!).

This year I decided to go to the convention too late to be included on any panels. This had the positive effect of giving me much more time to wander about talking to people. I caught up with some old friends and made some new ones. Conversations were continuous and diverse. Of the events, I particularly enjoyed talks given by Iain Banks and Alastair Reynolds.

These experiences were coupled with a few days in London (where, amongst other things, I went to see an exhibition of sublime bronze heads from Ife in West Africa), a meeting with my agent Victoria and catching up with friends and family. All in all, it was quite a trip, and one whose experiences I am still consolidating.