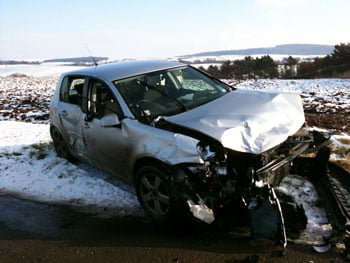 This weekend I was involved in a car crash. My partner was driving us southwards. As we came to a crossroads, another car, ignoring a give way sign, sped right in front of us. We hit it full on. It was thrown into a field, and we spun ending up some distance away facing west. There were two of us in our car, with our dog. There were five people in the other car, including one in a wheelchair. Amazingly, no one was hurt.

Various things have struck me about this experience all to do with safety. Firstly, that we have now forced our car manufacturers to produce cars that can bring its passengers through a crash of this magnitude without harm. Secondly, that because we and the other car have insurance, our car will simply be replaced. So that, sitting here now, it could almost be as if it had never happened. Again, our culture has managed to transform reality into virtuality.

Consider, by contrast, what has happened recently in Haiti. Poor people can’t afford insurance. So that when disaster strikes them, it is far from virtual. So that it becomes clear to me just how different my mindset is likely to be to that of a Haitian; how much his/her world must be one filled with anxiety, fear even. Whereas, cushioned by the wealth of the Western lifestyle, I live in a world in which the only fear is often some vague notion that something like cancer will get me one day… unless, of course, the great god Science should come up with a miracle cure.

One Reply to “car crash”