Qunoth – coming originally from Quyan keyu meaning ‘seven’ and noth meaning ‘ladder’ – refers to its position controlling the seven passes marked on the map above as purple chevrons. (The square frame marks the area depicted in the expanded version of the 2nd image) The second map shows Qunoth (the long red structure) – looking a little like a cuttlefish – extending as a blade of rock from the Guarded Land plateau – its […] 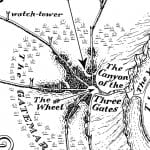 The City at the Gates is so named because it lies at the gates of Osrakum. Built on land reclaimed from the Gatemarsh, it has at its heart the great market of the Wheel. From here the five raised roads radiate out across the Guarded Land. The habitations of its almost three million citizens spread out along the causeways that carry the roads with their watchtowers. From the Wheel the Canyon of the Three Gates […]