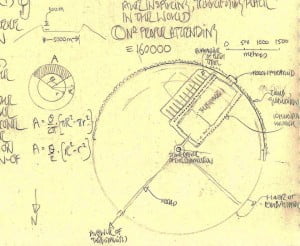 a plan of the Plain of Thrones 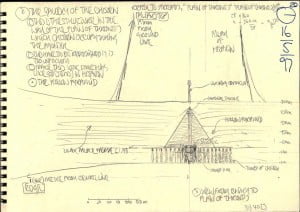 view from entry to the Plain of Thrones 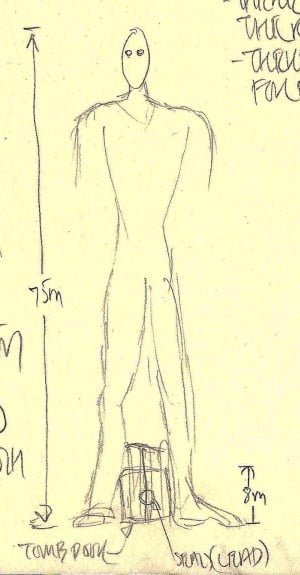 one of the colossal tomb guardian

The Plain of Thrones is a smaller volcanic crater located on the Isle which lies in the midst of the Skymere in Osrakum. This name comes from the complex of thrones which lie in a hollow in the south-western wall which is where the Chosen gather to witness the homage of the tributaries on the plain below during the ceremony of the Rebirth. It is here that the Apotheosis of a new God Emperor is held.

The plan shows the main features of the Plain of Thrones. At its heart, the Stone Dance of the Chameleon, a circle of calendrical stones upon which is inscribed the Law-that-must-be-obeyed. Further to the south-west lies the large rectangular space beneath the throne hollow on which the tributaries gather to celebrate the Rebirth. On one side like the bronze cages in which are put the flesh tithe children. The ‘crinkled’ edge indicates where the frieze of tomb guardian colossi are cut into the stone wall of the plain.

The view of the south-western end of the Plain of Thrones shows a part of the frieze of colossi at the centre of which is the door into the Labyrinth. Above this is the triangular hollow in which are located the thrones for the Chosen. That of the God Emperor lying at its apex. The terraces of the lower palaces run to either side. Rising up beyond the mountainous wall of the plain is the massive column of rock that is the Pillar of Heaven.

I have included a rough diagram I made of one of the guardian colossi to show its scale. Between its legs lies the door to a tomb for one of the Houses of the Chosen. The eyes of the colossus are hollow allowing the dead within the tomb to witness the Rebirth.

It is the awe that these produce during the Rebirth ceremony that has made the Plainsmen refer to the Masters as the Standing Dead.