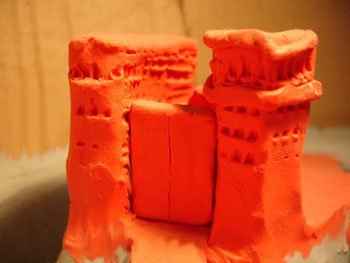 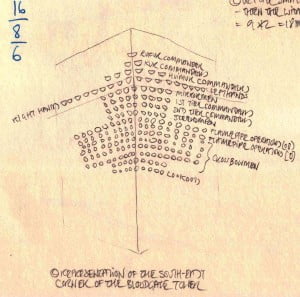 balconies on the corner of the South Tower 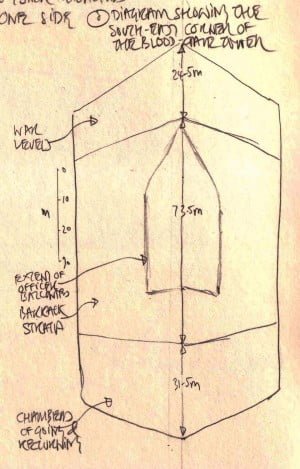 the South Tower as seen from the south-west

The Blood Gate defensive system consists of two sets of gates, a number of bridges to narrow and direct any attack and three towers. One of these, the Prow, is isolated on the other side of the Killing Field and thus behind any potential attacker. Like the other towers, it is provided with a great number of huge flame-pipes fed from vast naphtha tanks. The other two towers—one twice the volume of the other—stand on either side of both sets of doors. Both are armed in the same way as the Prow. All three towers have, besides their military engines, large residential quarters for its garrisons.

Focusing our attention on the Southern Tower—that is the one in which Carnelian and Blue take up residence—the 2nd and 3rd diagrams show the tower’s south-western (incorrectly identified as south-east in my notebook) corner. The patterning of balconies matches the military hierarchy of the Ichorian Legion. It also gives a notion of the scale of this tower and, thus, the whole of the Blood Gate complex.