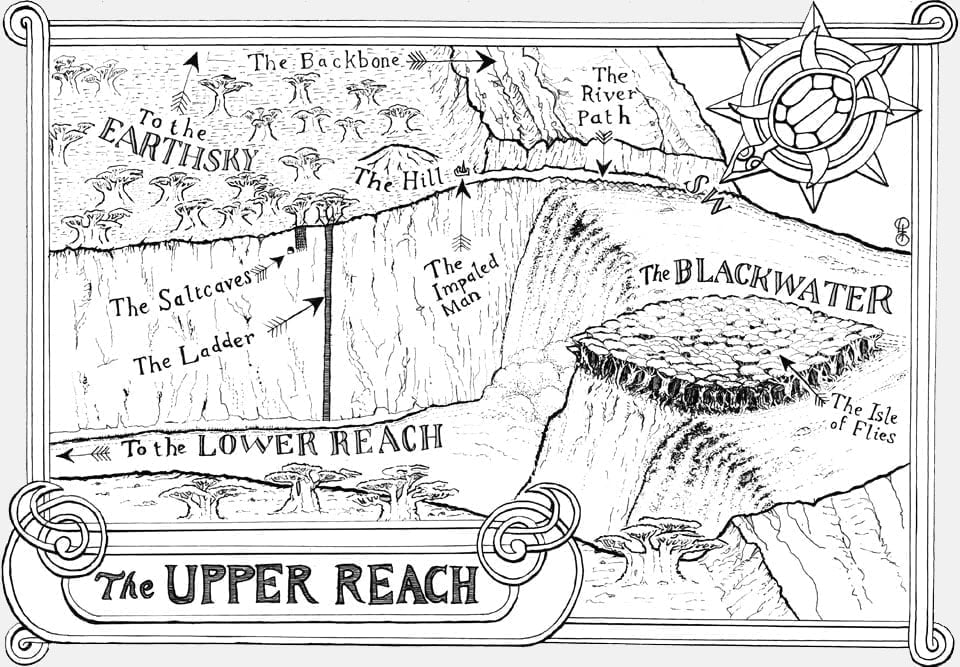 Upper Reach map in the style of Neil Gower

The image above is a new map that I drew, in the style of Neil Gower—who did the original maps, for the Second Edition.

map of the Upper Reach 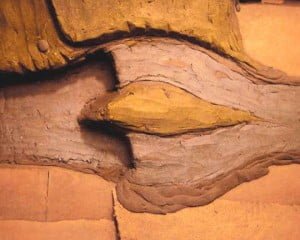 model of the Upper Reach seen from above 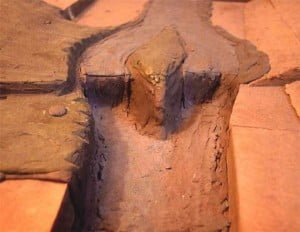 model of the Upper Reach viewed from the west

The second image, on the right, is my initial conception of the Upper Reach. At that time, the baobab grove (shown as small circles) was along the north bank, opposite the Isle of Flies. I refined my scheme by making a model.

The first photograph is of the model as seen from above. This model is the only one surviving of the three I made for the Stone Dance (I made one more for The Third God). The central, eye-shaped feature is the Isle of Flies, that is covered by a single, monstrous banyan. The Isle divides the flow of the Blackwater river (coming from the right and east), to tumble in the Thunderfalls into the canyon that leads eventually to the Lower Reach (left and west). The western point of the Isle of Flies juts out over the canyon like the prow of a ship.

Looking to the top of the picture, note the cliff bordering the north bank of the Blackwater. This is the edge of the Backbone, the basalt dyke that runs south across the Earthsky from the southern edge of the Guarded Land.

Note that this has another cliff edge running up and off the top left hand edge of the picture. It can be seen that the Isle of Flies is in fact merely an extension of this basaltic structure, which the Blackwater has broken through with its two channels. Though the model does not show this, the Backbone should continue from the southern bank of the Blackwater into the deep south.

A path runs along the northern shore of the Blackwater, under the cliff edge of the Backbone. This path opens out onto the baobab forest. The circular structure towards the upper left corner of the picture represents the knoll upon which Carnelian has the Plainsmen build their fortress. Moving south from here we reach the edge of the canyon where the Ladder drops down into its depths.

The second photograph of the model is taken from the west, and gives a different view of the features already described.