The Stone Dance Bible / The Chosen / The Yden 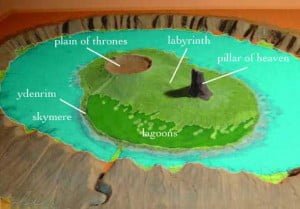 the Isle lagoons and Yden 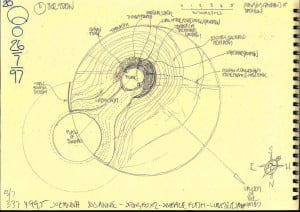 The Yden is the region lying within the Ydenrim; the Ydenrim is the lip of a submerged, ancient crater. This lip rises some little way above the level of the lake.

Much of the Yden is land that is the result of the subsided ash cone of the volcano of which the Pillar of Heaven is the only remains—that volcano’s main vent solidified into basalt. The rest of the Yden consists of shallow lagoons whose level the Ydenrim raises above that of the surrounding lake.

The diagram shows the Labyrinth, built on the higher ground lying between the Pillar of Heaven and the Plain of Thrones. Around the base of the Pillar are the Forbidden Gardens with their terraces. Dotted lines show height contours. Note the wide contour to the northwest (this is clearer on the expanded diagram) that shows the wetlands that slip away into the lagoons.

Also shown is the route taken by Carnelian and Osidian on their first visit to the Yden: from the Quyan Stair, through the Forbidden Garden and down towards the lagoons.