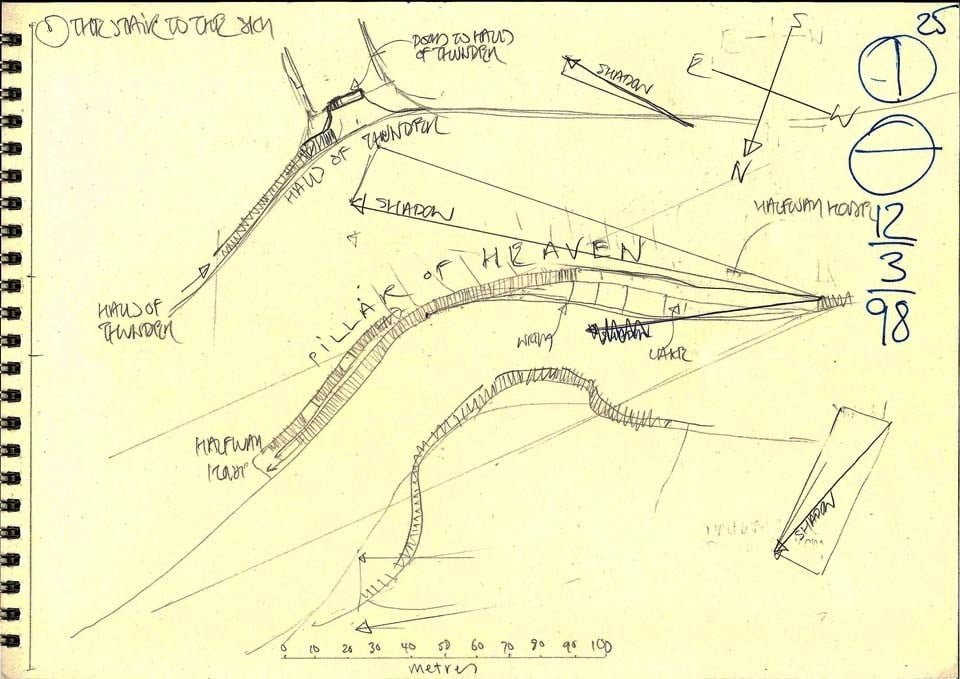 sections of the Rainbow Stair

The Rainbow Stair is a staircase cut into the stone of the Pillar of Heaven in a depression running up its north-western face. Its name derives from the way it is paved, as is described in The Chosen: “steps striped with red chalcedony and amber, gold, jade, turquoise and lapis blue and, where they touched the Pillar, bordered by a band of amethyst”

The Chosen believe rainbows link earth and sky. This is why the God Emperor, and others of the House of the Masks, wear a vertical rainbow strip as part of their heraldry. The Rainbow Stair connects the earth of the Labyrinth with the Halls of Thunder cut high into the Pillar of Heaven. These halls are believed to be in the sky.

The three diagrams show three sections of the Rainbow Stair as it zig-zags 2000m up the face of the Pillar of Heaven. The lowest shows the steps rising from the ground. The middle diagram shows a portion of the Stair (in which a scene from The Chosen is enacted) that is bordered on its northern edge by a narrow lake, and on its southern edge by wayhouses. These wayhouses are caverns cut into the rock; traffic going up and down the Stair can shelter in these at night. The topmost diagram shows the termination of the Stair at the gates to the Halls of Thunder.