The Stone Dance Bible / The Chosen / The Pillar of Heaven 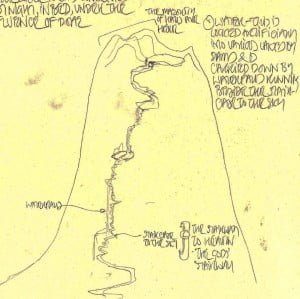 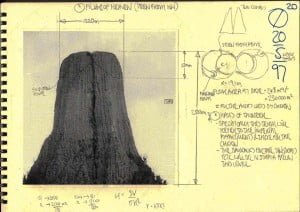 the Pillar of Heaven

The Pillar of Heaven is the remains of the last volcanic eruption at Osrakum. A vast cinder cone, eroded over aeons, leaving only the basaltic intrusion of the main vent. This structure actually consists of two pipes ‘welded’ together and that reach a height of 2500m above the level of the Skymere.

The first sketch shows my initial conception of the Pillar of Heaven that had a small lake set into its summit. This lake fed a series of waterfalls that cascaded down the Pillar, in what later became the Rainbow Stair. At this point I conceived of the Halls of Thunder as being built into the cliffs overlooking this lake. Both these and the summit lake were discarded.

The final form the Pillar took is shown in the second diagram—and can also be seen in the model I made of Osrakum. It is based on Devil’s Tower in Wyoming— that, incidentally, was the mountain playing a central role in Close Encounters of the Third Kind.

The Pillar of Heaven dominates the heart of Osrakum. Close to its summit it has been hollowed to form the caves and chambers known as the Halls of Thunder. It is here that the God Emperor and the rest of the House of the Masks retire from the summer heat. In this respect, the Halls of Thunder perform the same function for the Imperial House as do the various eyries of the other Houses of the Chosen. The Halls of Thunder are reached from the Labyrinth by means of the Rainbow Stair.

The Pillar of Heaven