the Stairs of the Approach

The Stairs of the Approach link the centre of the Halls of Thunder to the complexes of chambers used by the House of the Masks and the Wise. They consist of three, precipitous flights of steps each leading up to a landing. The final landing terminates at the Iron Door that opens into the Thronehall. The Stairs are flanked by colossal idols of the many avatars of the Twin Gods.

The first diagram shows an end elevation of the Stairs. I went to such elaborate lengths because I wanted to make sure that, though it was impossible to see any of the landings from the ground, or while on any of the flights of steps [positions A, D, G & K], that it was nevertheless possible to see all the way to the Iron Door from within the Chamber of the Three Lands [position X]. The inability to see a platform to which a stair climbs is true of Mesoamerican pyramids—those climbing the steps appear to be doing so to the sky.

Note: position A corresponds to the outer wall of the Chamber of the Three Lands. 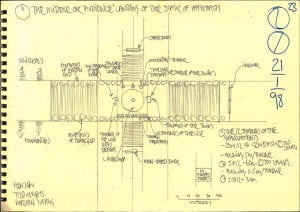 plan of the 2nd landing

The second diagram shows the second landing, and is where Carnelian meets Molochite. It is set about with thrones for the various representatives of the Three Powers. This landing is used for conferences between the Powers. From here, branch stairs give access to the chambers of the Wise as well as a further entry into the palaces of the House of the Masks.