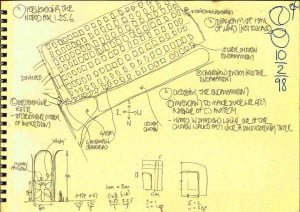 the Encampment of the Seraphim

The first diagram shows a plan of the Encampment of the Seraphim, though not to scale. The largest chamber of the Halls of Thunder, it was carved, columns and all, from the rock of the Pillar of Heaven. The Encampment is depicted here as it appears in the chapter of The Chosen, The Silent Heart. Carnelian’s route is shown, beginning at the top right hand edge, just after he has climbed the urine stained steps up from the ancient halls. It winds through the pavilions (shown as squares), culminating at one of the entrances to the Sunhold. The nave, called the Hall of Wings, is shown running along the bottom edge of the diagram. The positions of the Great and the Lesser Chosen are sketched in. 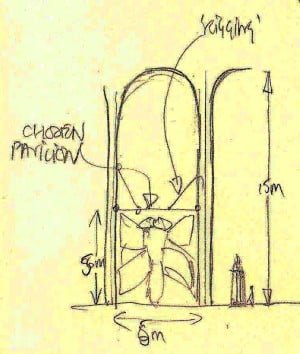 a pavilion in the Encampment

The second diagram is a detail of the first and shows how the pavilions within the Encampment are created by stretching cloth between its columns. The heraldic glyph shown here is Jaspar’s dragonfly and thus incorrect; House Imago being of the Great has the right to accommodation in one of the chambers that look out from the Pillar of Heaven.

Note the two small figures to the right of the pavilion that are drawn roughly to scale. The left is one of the Lesser Chosen on his court ranga: the right, one of his household.

the construction of a pavilion

The third diagram shows the spreadsheet that I used to calculate the extent of the Encampment so that it would be capable of accommodating all the Lesser Chosen. One of the smaller diagrams indicates a pavilion incorporating twelve pillars. Further, it shows that each consists of five cells with the sixth being a sort of atrium. The arrangement of the pavilions relative to each other is shown by the six, smaller diagrams.

It is interesting that the Chosen call this an ‘encampment’. It suggests that the ritual of Divine Election might have once been carried out in the open…