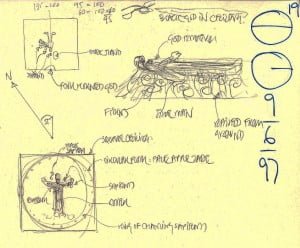 When Carnelian meets the God Emperor Kumatuya—They are lying between the Twin Gods—spreadeagled on the jade of the Green God and beneath an image of the Black God—surrounded by Sapients and ministered to by others, chief amongst them the Grand Sapient Immortality.

The Wise use the God Emperor as an instrument of divination. The God Emperor’s pulse is monitored and its beat is transferred down to the Turtle’s Voice—the stone bell hanging in the Chamber of the Three Lands—from where it echoes throughout the Halls of Thunder.