The Stone Dance Bible / The Chosen / The Halls of Thunder 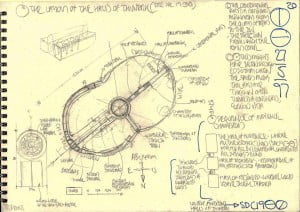 original plan of the Halls of Thunder 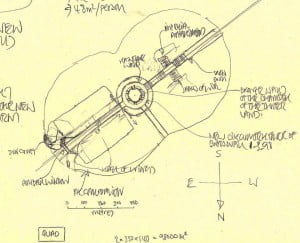 revised plan for the Halls of Thunder

The Halls of Thunder are a complex of palace caverns cut high into the rock of the Pillar of Heaven. It is here that the God Emperor, the court and the rest of the House of the Masks retire during the summer months to escape the heat in the crater below.

The predominant aspect of the Halls is the ceremonial axis, running southwest to northeast, corresponding to the route the Rains take from the southern seas across the Guarded Land to Osrakum.

Most of the main structures lie along this axis or to either side of it. Beginning from the southwest Creation Window there is a progression of: the Thronehall, the Stairs of the Approach, the Chamber of the Three Lands (where the Election of a God-Emperor is conducted), the Encampment of the Seraphim and culminating in the Sunhold and the Amber Window that lets light in from the northeast.

The first diagram shows my initial conception for the Halls of Thunder, and includes all the structures listed above. Note the passage connecting the gallery around the Chamber of the Three Lands to the head of the Rainbow Stair to the northwest which is how Carnelian first enters the Halls. Shown also are the horseshoe of chambers cut into the whole of the northeast end of the Pillar of Heaven. The small diagram in the lower lefthand side shows the door to the Sunhold.

The second diagram was a necessary refinement of the scheme that was forced on me once I calculated how large the Encampment of the Seraphim had to be to accommodate the Chosen. Additionally, I had by then a much better understanding of how the northeastern end of the Encampment interfaces with the Sunhold in the east, with access to the chambers used by Carnelian and the rest of the Chosen, and that now runs only along the northern face of the Pillar of Heaven.

Note also the more precise articulation of the Chamber of the Three Lands with its moat and the bridges that cross it. Also the extra stairs off the second landing of the Stairs of the Approach, leading on the southeast to the chambers used by the House of the Masks (including the Dreamchamber) and in the northwest to those used by the Wise.

The Halls referred to here were constructed higher in the Pillar of Heaven over an earlier set of ancient halls.

The Halls of Thunder