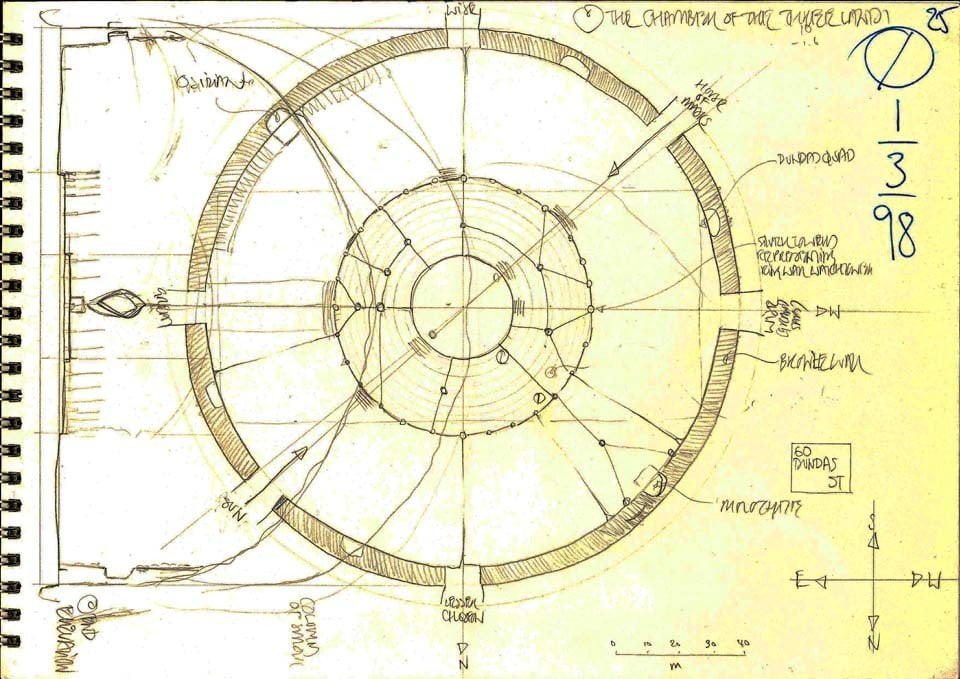 the Chamber of the Three Lands

The Chamber of the Three Lands is a cave lying at the heart of the Halls of Thunder where the Chosen gather to elect a new God Emperor. The interior of this chamber is described in great detail in the chapter of The Chosen, “The Election”.

The diagram shows an end elevation (showing the position of the immense stone bell) of the Chamber with a plan superimposed. In the plan, it can be seen that the floor of the Chamber has been fashioned in the form of a wheelmap. A wheelmap is a representation of the Chosen view of the world and, specifically, of their Commonwealth.

Like all wheelmaps, there is a central black disc representing Osrakum; within a red one, representing the plateau of the Guarded Land; within a green one representing all the lower lands of the barbarians. The road systems of the Commonwealth are inlayed in silver into the floor of the Chamber.

Of note is that in the Chamber the wheelmap representation has been accentuated, so that the red area is raised above the green and the black above the red. During the election, this arrangement is used to locate the various powers in their symbolic roles. So that, for example, the Wise ring the various diases to represent the way the Law protects the Commonwealth.

These arrangements, and how the processions interact with the Chamber, are shown on the page The Election

It thus becomes clear where the Chamber gets its name: it is a form of symbolic and, even sympathetic, magic, by which the Chosen maintain their possession of the World.