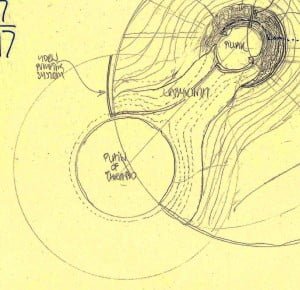 map of the Labyrinth

Lying within the Yden, the Labyrinth covers the ridge connecting the Plain of Thrones to the Pillar of Heaven. It consists of an immense, hypostyle hall in which each column is a mausoleum for a past God Emperor, Empress or other important personage from the House of the Masks. There are over one thousand of these column mausolea. Originally they were free standing. It was only later that they were spanned by arches, and the whole structure roofed over. The Halls of Rebirth are partially built into the south-western wall of the Plain of Thrones but it also spills into the Labyrinth.

The two depressions that ‘nip’ the cross-section of the Pillar of Heaven contain the only ways by which it can be climbed. The north-western depression contains the Rainbow Stair.

+ SPOILER before chapter: The Ladder, in The Chosen

The south-eastern depression of the Pillar of Heaven contains the Quyan Ladder that Carnelian and Osidian descend to the Yden.