The Stone Dance Bible / The Standing Dead / The Earthsky / The Crag 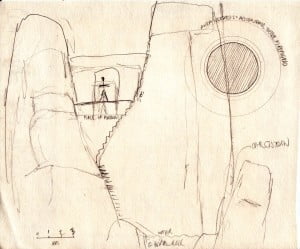 Ancestor House of the Ochre, perched on their Crag

plan and elevation of the Crag of the Ochre Tribe

The first diagram shows the Crag—lying at the heart of the Grove—as it might appear to someone standing in the clearing below the Ancestor House.

This was my original conception derived from the second diagram. As it came to be used in The Standing Dead, the scale should be perhaps a little larger… but not much. It should also be noted that I decided to move the cistern from where it is shown on the diagrams. As for the circular structure on the diagra—that has written around its edge “area needed to accommodate Tribe as refugees”—I’m afraid I can no longer remember what that is about…

Steps cut into the rock clib to the Ancestor House, rising past it to the summit. It is on the summit, upon funerary trestles, that the Ochre expose their male dead for sky burial.

The bones that line it produce a screen that intensifies an Ancestor House’s connection with earth and sky. Women walk barefoot on this, with their heads covered. Men walk shod until they reach their chairs—built on a base of children’s skulls, with a seat of men’s bones and with a long back reaching up to the ceiling.