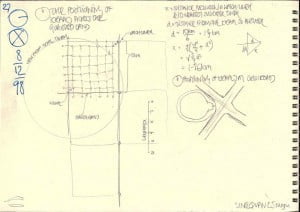 kraals across the Guarded Land 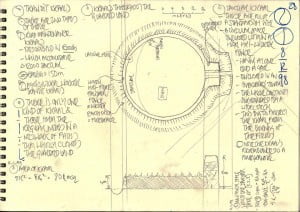 There are countless sartlar kraals across the Guarded Land, each constructed to plans specified by the Wise (as is described in the epigraph that begins the third chapter of The Standing Dead). Sartlar are confined within these kraals, when they are not labouring.

On the right of the first sketch is a kraal at the intersection of the earth roads or tracks, whose grid covers the Guarded Land. On the left is a diagram showing how this arrangement interfaces with the roads and their watchtowers.

The second sketch shows a typical kraal from above and from the side. A kraal is a circular space enclosed by a high, thick fence of woven hri-wicker, having a gate at one end, that is guarded by an overseers’ tower. A wide ditch surround the kraal and acts as a fire-brake during the burning off of the stubble (occurring every year at the end of the 6th and 12th months).

I used this diagram when I was writing the scene in The Standing Dead showing Carnelian and Osidian’s first night in a kraal. Their positions, and that of the sartlar, are shown. To help me get a feeling of the scale, I included a 2m high man, and a small rectangle representing the study I was writing in at the time.