The Stone Dance Bible / The Masters / The Guarded Land / Watchtowers 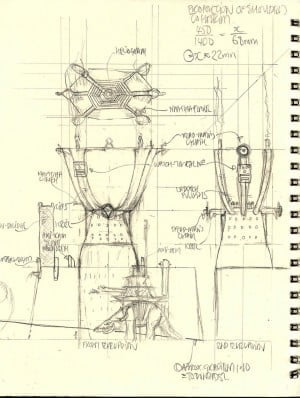 elevations and plans of a watchtower

Watchtowers are set at regular intervals along the raised roads of the Guarded Land. They form not only the primary communications systems of the Commonwealth, but also provide the Wise with a ‘sensory grid’ with which they ‘see’ much of what goes on in the Guarded Land. In addition, each tower is garrisoned with enough auxiliaries to defend the gate over which each tower stands guard.

The communication system has two distinct aspects. Messages can be carried as sealed despatches at furious speed along the leftway by couriers who obtain fresh aquar at each tower. Couriers, and what they carry, are protected by stringent codicils of the Law-that-must-be-obeyed.

Even more rapid are encoded messages jumped from tower to tower by means of the heliographs during the day or naphtha flares at night.

Watchtowers play an important part in the Stone Dance story and it was because of this that I felt the need to understand their exteriors and interiors so well.

The diagram shows end elevations and a plan of a standard watchtower. Each tower stands guard on a gate controlling passage from one province into another through the wall that carries a leftway. From the summit of a watchtower, six ribs curve up holding aloft a platform at the centre of which is located a heliograph device. Naphtha is piped up two ribs burn in flares to transmit signals at night when the heliograph cannot work. The ribs emerge from a keel beam at the ends of which are two of the tower’s four deadman chairs. The other two hang from the upper ends of the middle ribs. Lookouts sitting in these chairs maintain a constant scrutiny of the Guarded Land and the road below. The keel beam is embedded in the superstructure of the tower that consists of a number of floors: those above the level of the leftway are connected by ladders that can be raised by means of counterweights. Those below the level of the leftway are connected by ramps. Note the drawbridge that carries the leftway ove the gateway below. 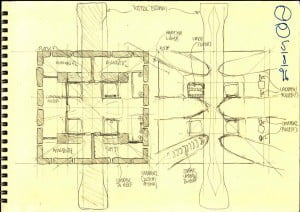 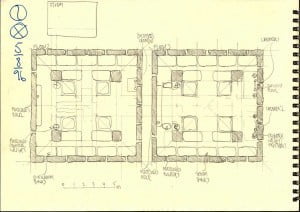 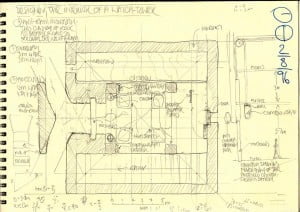 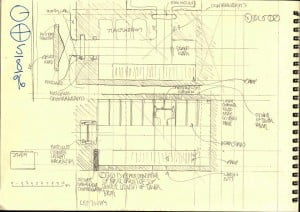 two of the stable levels

These four pages from my notebooks show the various levels of a typical watchtower: from its roof to its lowest storey.

The right hand diagram on the first page shows the roof of the tower, with its six ribs emerging from the keel beam. It is on the ends of this beam that two of the deadman chairs are located. Note the trapdoor opening down into the uppermost storey. Note also the staples climbing up the rib in the lower left that gives access to a naphtha flare and to the heliograph platform. The left hand diagram shows the upper storey taht provides accommodation for the staff of ammonites who operate the heliograph. It is these chambers that Carnelian, his father and the other Masters occupy each night on their journey to Osrakum.

The second page shows the two storeys taht are the barracks of the tower garrison.

The third page shows the storey of the tower that is level with the leftway. In the upper part of the diagram is a cistern. Corresponding to this, in the lower part of the diagram, is the ramp that leads down into the stables. A portcullis seals the entry from the leftway. Standing before this entrance is a monolith the purpose of which is to make it impossible to use a battering ram against the portcullis. To the right of the portcullis you might be able to make out the faint sketch of an aquar as seen from above. I put this in so as to be able to more easily imagine what it would be like leading an aquar into this space. A small diagram on the right hand side of this page is an elevation showing how the portcullis and its counterweights work. It also shows measurements for the heights of some of the storeys.

The fourth page shows two of the three stable levels that are linked to the upper entrance by ramps. Various other mechanisms are lodged here that have to do with the operation of the portcullis etc in the levels above. The lowest level of all is the uppermost diagram on the fourth page. Note that it too has a portcullis and a monolith set facing it. This gives direct access to the roadway running along the foot of the leftway.