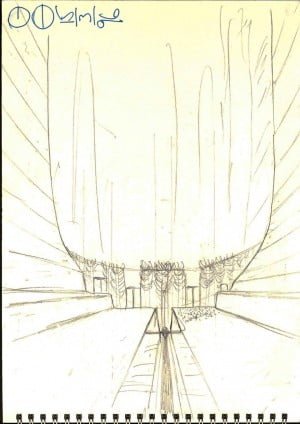 the western approach to the Green Gate 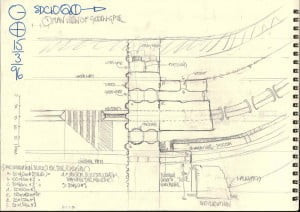 a plan of the Green Gate fortress

The Green Gate is the first of the Three Gates and is a curtain wall running across the Canyon, the surface of which is covered in bronze spikes, so that the whole mass looks like an immense hedge. At the lower level, gates act as ‘airlocks’, where goods from the outer world are transferred to the other side by Red Ichorians. Gates higher up, on either side, allow the leftway and the Lords’ Road to continue along the Canyon. The former allows messages to pass in and out of Osrakum: the latter is used by the Chosen.

The diagram also shows how the Cloaca passes under the Gate through grilles. A throng of people are shown for scale.

The second, plan diagram shows the double set of gates, each consisting of three gates, that seal off, between them, two ‘airlocks’. It is by this means that contamination from the outer world is kept out of Osrakum.