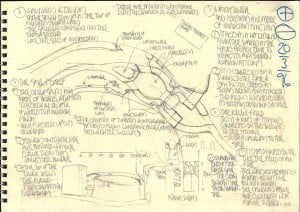 plan of the Blood Gate showing its setting in the Canyon 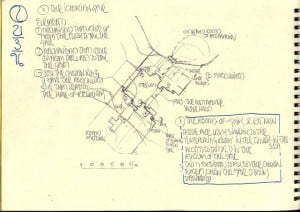 a plan of the Blood Gate

The Blood Gate is the primary defence structure of the Canyon of the Three Gates and, as such, the primary defence of Osrakum. It is called the Ichorian Gate in Quya, but the Blood Gate in Vulgate, and is also called the Red Gate in both languages. Indeed, the fortifications themselves, as well as the systems that extend out in front of them, are painted the colour of fresh blood.

As a defensive system, the Blood Gate is exceedingly sophisticated. The Cloaca branches around the main superstructure, rendering it a kind of island in the middle of the Canyon floor. Two bridges lead to the ‘killing field’ that spreads in front of the gates themselves. Any army having made it this far would be caught in a crossfire from not only the towers flanking the main gate, but from the watchtower rising in its rear.

The actual gates are, by far, the most massive in the Three Lands, and there are two sets of them forming another ‘airlock’. It is here that are found the elaborate cleansing chambers that are provided for the Chosen so that they are not forced to endure the quarantine that the Wise insist on.

Beyond the Blood Gate lie the Red Caves in which the ‘dragons’ of the Red Ichorians are stabled and where their main barracks are located.