Qunoth – coming originally from Quyan keyu meaning ‘seven’ and noth meaning ‘ladder’ – refers to its position controlling the seven passes marked on the map above as purple chevrons. (The square frame marks the area depicted in the expanded version of the 2nd image) 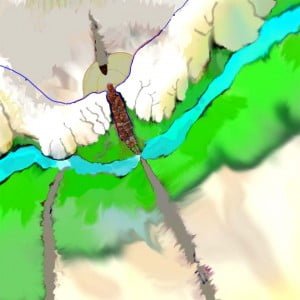 Qunoth on the edge of the Guarded Land

The second map shows Qunoth (the long red structure) – looking a little like a cuttlefish – extending as a blade of rock from the Guarded Land plateau – its fissured limestone being shown in white. The Qunoth rock is part of a vast basalt dyke (that can be seen better on the expanded image) that the Gorge river breaks through far below – the floor of the Gorge is shown in green. The Ringwall road is the pale brown thread passing across the northern edge of the city. Its leftway, shown in blue, separates from it, does a circuit of the city, and returns to join the road. Top left, on the other side of the raised road, are the shanties spreading off into the interior. 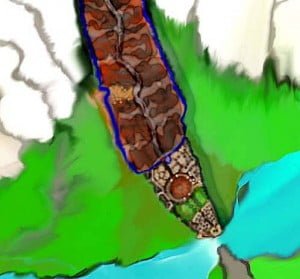 the city and the fortress of Qunoth

The third diagram shows the part of Qunoth that extends out high above the land below. The orange region (towards the top left) is the Midden. The dark red areas are the tenements of the city, the pale threads are roads. Fort Street runs down the spine of the city towards the gate – shown as a red dot – of Qunoth’s legionary fortress. Southwards, beyond this, are the paler legionary barracks and stables. The ‘red eye of the cuttlefish’ is the cothon. The green region beyond is parkland and the pale triangle on the other side is the sanctum. The pale tip is the tower of the Legate of Qunoth that stands above the white threshing falls far below.