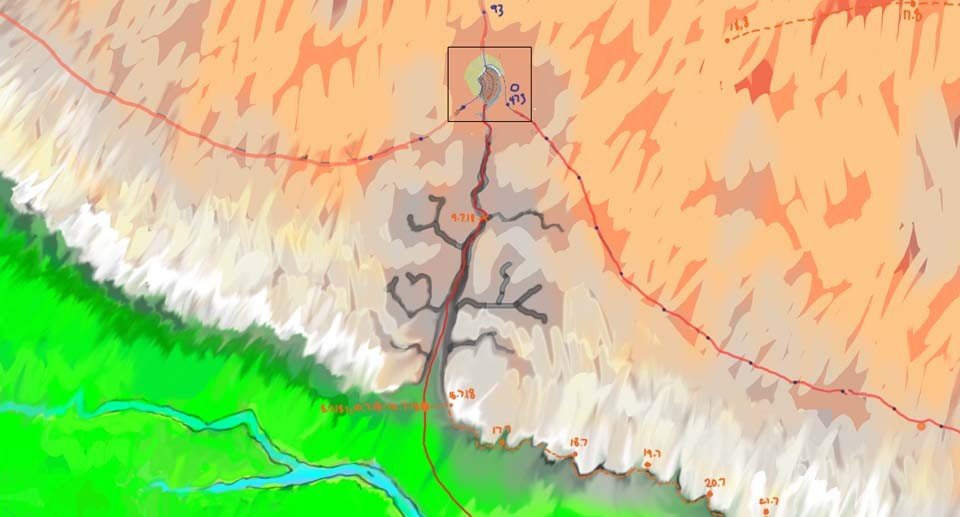 Makar at the top of the Pass

The map above shows the location of Makar, near the southern edge of the Guarded Land, and at the head of a canyon system that runs down to the Leper Valleys. It is the terminus of the Great South Road from Osrakum. 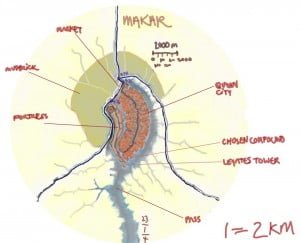 The second map shows Makar in some detail. The city proper is the curving red element that is shaped a little like the body of a peeled prawn. This part is ancient and is a sort of peninsular surrounded by canyons that are the beginning of the system of canyons running down to the Leper Valleys. Alongside the Old City, running down its western side, is a much narrower peninsular upon which is built the legionary fortress of Makar. Makar’s red eye is its cothon.

The large yellow-green swelling to the north of the city is an area dense with hovels, within a boundary ditch. The indigo lines show the raised roads of the Ringwall and the Great South Road. Three watch-towers – shown as violet spots – lie on or near the junction of these roads. The most northern stands at the junction. The other, nearby, stands guard over a gate that gives access to the Pass and, thus, controls the route down to the Leper Valleys. The third guards on the gate of the legionary fortress. When Carnelian enters the city from the north, he passes each of these towers in turn.

Note the road that runs through the fortress from its entrance by the watchtower all the way to the ‘island’ at its southern tip – that is reached by means of another ‘island’ (the sanctum) and two bridges. This last tear drop, looking down the Pass, is the tower of the Legate of Makar. 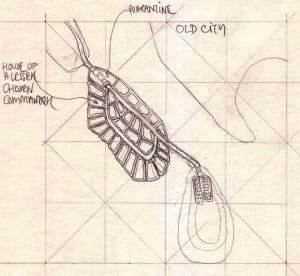 the sanctum and the tower of the legate of Makar

The third diagram is a sketch showing the most southern part of the legionary fortress. The first ‘island’ is the sanctum and is divided into domains for the use of the Masters who command the dragons of the legion and for their households. The most southern ‘island’ of all is where are located the halls of the Legate of Makar.